Byron Preiss – A Solution to The Secret – Image 1/Verse 7

Affiliate Links
Hello and welcome to my post about The Secret – San Francisco. I receive several emails a week asking me for my opinion or to help with a theory. Honestly I don’t have the time to work on your theory–I barely have time for mine! Yes, I’m still searching, and I already have a partner.

Golden Gate Park now requires you to apply and get approval to dig. They will then assign a person to accompany you. As of 1/1/2020, they’ve informed me that they’re scheduling only 2 digs a week, and they’re booked 10 months out. More info can be found on the Golden Gate Park dig request form.

Read this article for 12 Tips to Help You Search for a Casque!

This article refers to Image 1 – Verse 7 in  The Secret by Byron Preiss. Preiss buried 12 casques around the USA in 1981 and wrote a book called THE SECRET (no, not the self-help book) with clues on how to find them. In the casques were keys that could be redeemed for a gem. UPDATE: THREE casques have been found since 1981: in Chicago, IL, Cleveland, OH, and Boston, MA. After I saw the TV show Expedition Unknown about the treasure hunt, I worked on the one closest to me, San Francisco. I am a programmer by day and mystery author by night, so it was right up my alley.

Each treasure had clues embedded in a painting and a poem (verse). When I had taken up the case, people had figured out that Image 1 and Verse 7 go together and refer to a treasure in San Francisco. They were debating exact locations, though. After 7 hours of studying and researching, I thought I had cracked the case.

Each city and story relates to immigration, in the case of San Francisco, it’s the Chinese, and the treasure is a pearl.

Here are the clues:

At stone walls door
The air smells sweet
Not far away
High posts are three
Education and Justice
For all to see
Sounds from the sky
Near ace is high
Running north, but first across
In jewels direction
Is an object
Of Twain’s attention
Giant pole
Giant step
To the place
The casque is kept

The G and h at the top of her robe tells us this image is in reverse, so I flipped it horizontally. When you do that you see a clear outline of Half Dome in Yosemite at the top, with a jail window in it. Half Dome is a reference to California, and the jail window San Francisco (Alcatraz).

6:00 on the clock refers to June (6/12 months), the month in which the birthstone is a pearl — and also moonstone, by the way. The rose is the flower for June. On the May painting (Emerald/Chicago) you will see Lily of the Valley, which is the flower for May. I know, because that’s my birth month! The rose flower is in the shape of Angel Island – similar to Ellis Island, this is where immigrants entered into San Francisco.

Here is the painting reversed: 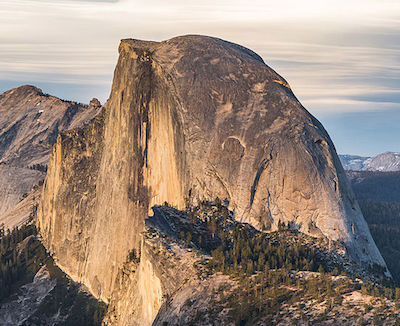 The rectangle on her dress that contains the dragon is most definitely a map of Golden Gate Park vertically, with the woman’s arms being “Crossover Drive” – more about Crossover drive in the verse. Her fingers point to Funston Drive. I think Preiss was hoping this search was FUN.

In 1981, there used to be a whale statue in front of the old planetarium (it was also an aquarium at the time) which looks similar to the middle of the dragon: 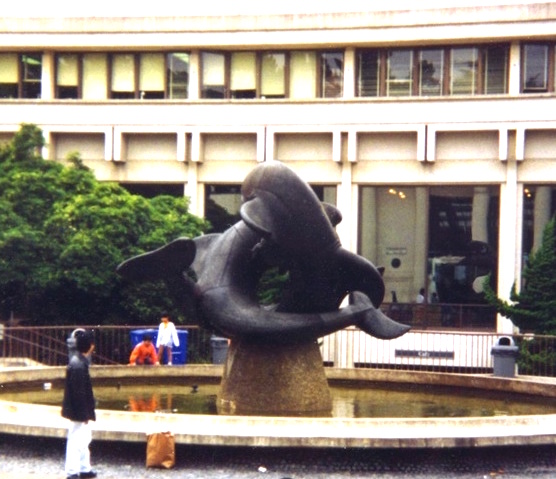 But there is another map superimposed onto the woman. It’s a map of the exact area of the park Preiss wants you to go, next to the Science Center.  The “pearl” is the Frances Scott Key monument. 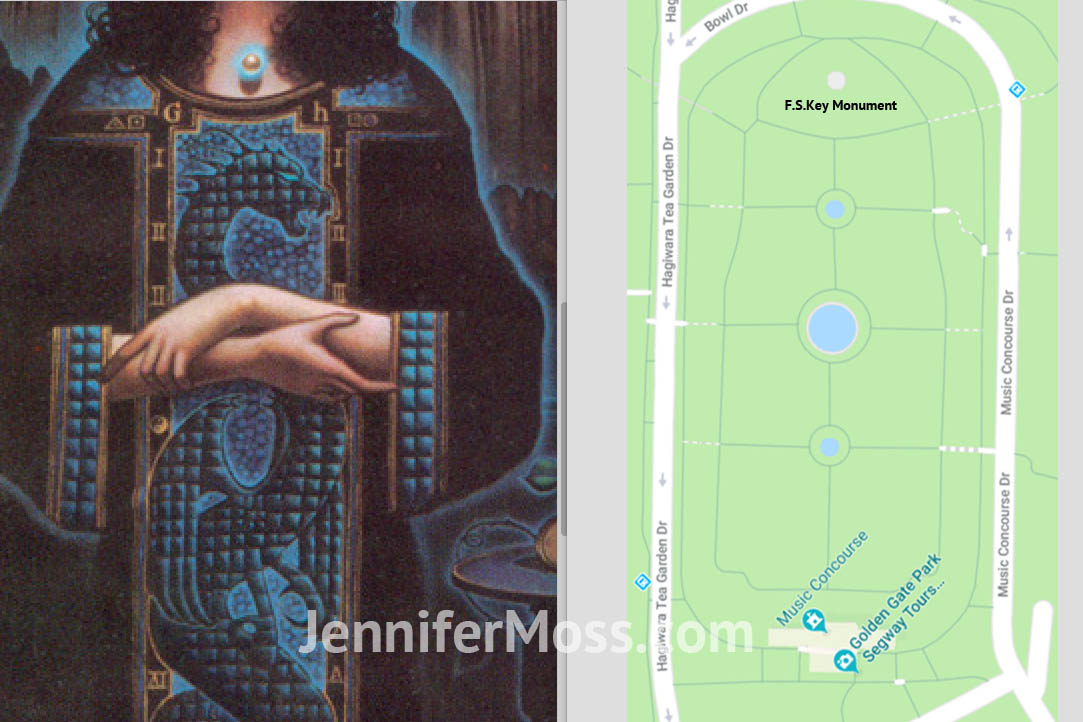 Now let’s break down the verse:

At stone wall’s door – start at the Music Pavilion – a big stone wall with a door in it. 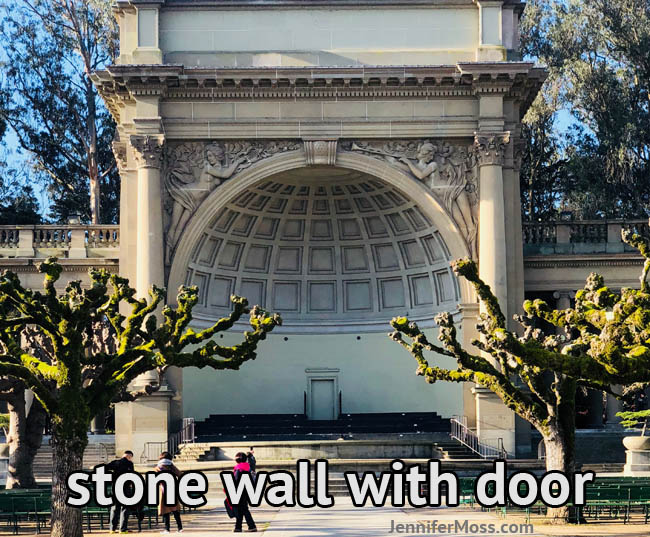 The air smells sweet – Reference to SF: Ghirardelli chocolate factory
Not far away
High posts are three – Sutro tower, which can be seen from this section of the park.
Education and Justice
For all to see – In school we say the pledge of allegiance to the flag (and justice for all).
Sounds from the sky – Bombs bursting in air
Near ace is high
Running north, but first across –  Crossover Drive in the park then turns into Highway 1
In jewel’s direction
Is an object
Of Twain’s attention – If you stand at the music pavilion, and face in the direction of the San Fran Maritime Museum (where there is a big steamboat paddle), you’ll see the Francis Scott Key monument across the way.
Giant pole – flag pole on top of FS Key Monument
Giant step – “One small step for man, one giant leap for mankind” – refers to the planetarium (and big staircase). There’s also 3 giant steps on the monument.
To the place
The casque is kept

Look at the arch in the Francis Scott Key memorial – looks just like the painting: 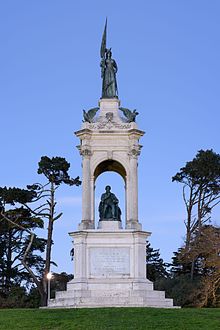 There are many references on the painting to the Francis Scott Key memorial.  Many of the little symbols are on the monument, plus it has the verses of the Star Spangled Banner labeled in Roman Numerals. I, II, III, IV.

For instance, on the bottom of the rectangle on her dress you see this symbol, which is on the back of the Key monument: 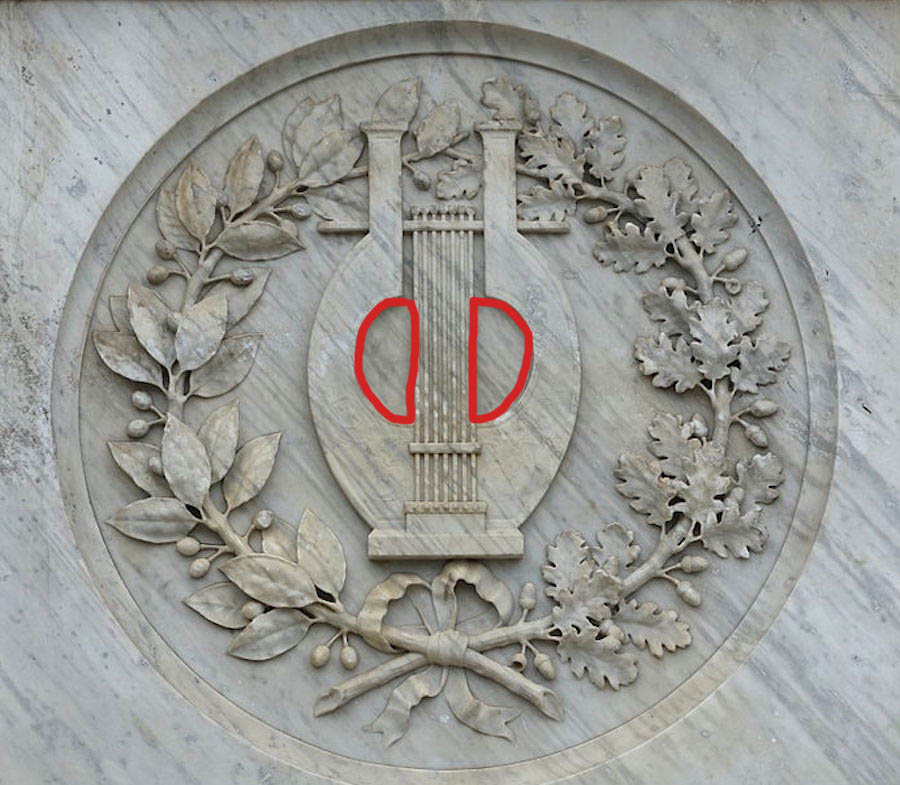 I believe the  I II II (122) on the left side of the woman’s cloak (flipped) is part of the Latitude/Longitude of Golden Gate Park, 37.7694° N, 122.4862° W. There’s also a 38 in her hair, which someone thought might refer to it, too.  The other Roman numerals probably refer to the verses of the Star Spangled Banner which are printed on the monument, itself, with Roman numerals.

What clinched it for me was finding the Buffalo – actually there are 4, one on each side of the monument. The woman’s face is the buffalo’s face and her hair, eyes, open mouth, and cheekbones allude to it. Also look at the “rocks” behind her, which emulate the eagle’s wings. There is also an eagle head to the right of her. On the monument, the star symbolizes the pearl on the painting. On the left of her head, the top curls actually form a little head with horns.

So I made a four-hour journey to Golden Gate Park and walked all around the Francis Scott Key monument. I noticed that the woman’s fingers are pointing to the numbers 3 (left) and 4 (right). I believed that she was literally “pointing” to the burial spot so I had to find the 3-LEFT, 4-RIGHT something.

Note: on one side of the FSK monument is a plaque with Verses 3 & 4 of the Star Spangled Banner – clearly marked III-IV. It’s possible that the casque was buried right under that side of the monument, however now there is a sidewalk paved over it. Also, it is way out in the open, in the middle of the park. According to the book, Preiss didn’t bury them in such open, public places.

So I walked around counting trees, counting benches. Nothing seemed to fit. But then I had an A-HA moment! Between the F.S. Key Monument and Planetarium is a set of LARGE steps! 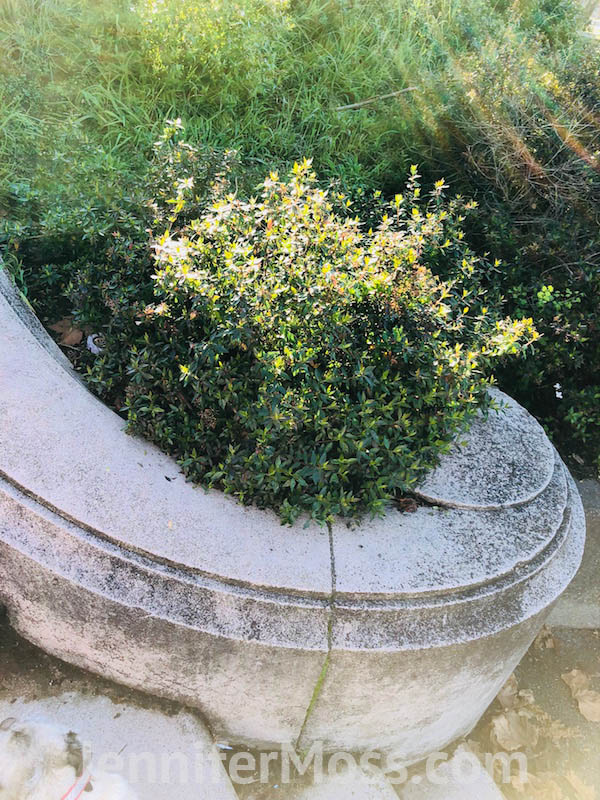 The staircase is to the LEFT of the Key monument. So, you go up three steps on the left and then have to turn right to ascend the rest of the steps.

If you look down from that spot, a SPIRAL (depicted on the painting next to the rose) encircles a planting bed. Who knows? In 1981 that could have been a rose bush.

I believe if you go up the 3 STEPS on the left, and then 4 STEPS on the right, the casque was buried right there.  I’m sorry to say no casque was found. This is an incredibly landscaped spot, though, and I did see new irrigation, so it had to have been worked on in the past 37 years. If someone found the casque, they probably thought “cool” but had no idea what it was.

You are welcome to try, if you want, and take your chances digging in the park – I recommend you get permission from the Park Service before doing so. And if you find the casque from this post, I just ask that you give me some credit. 🙂 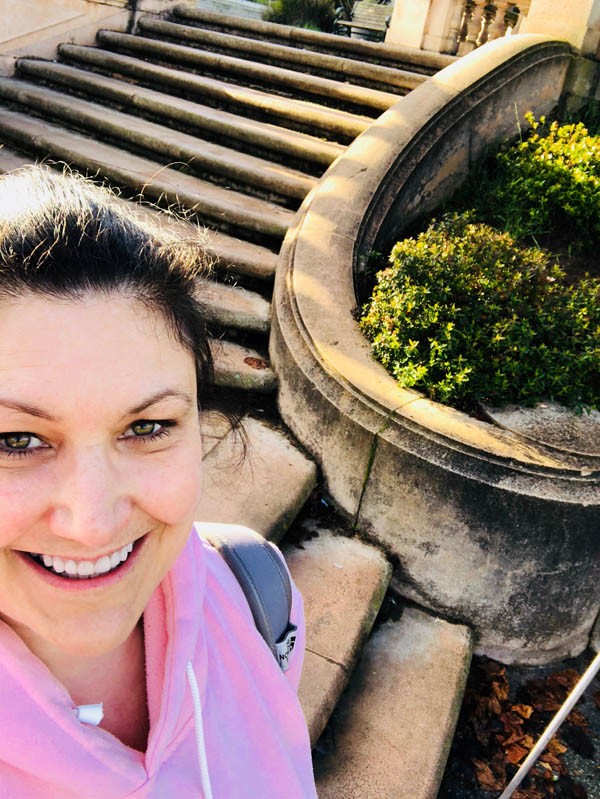 One last thing: if you look at the painting (in reverse), the dragon is literally looking at this very spot. His snout would be touching it.

So I leave you with a pic of me and the spot where I believe the casque was buried in 1981.

Although the book says you can present the location of the casque (not necessarily the key), to claim the jewel, that is not the case now that Preiss has passed. I emailed Preiss’s widow, and she replied that they do not know the locations of the casques, and you must find the (actual) casque and present the key.

~ Jennifer Moss
12 Tips to Help You Search for a Casque 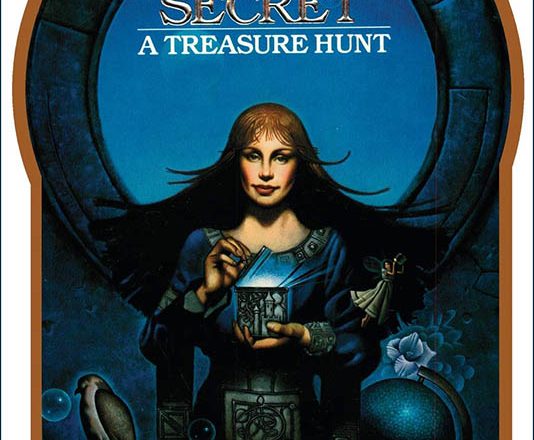 12 Tips to Help you Search for The Secret Casque